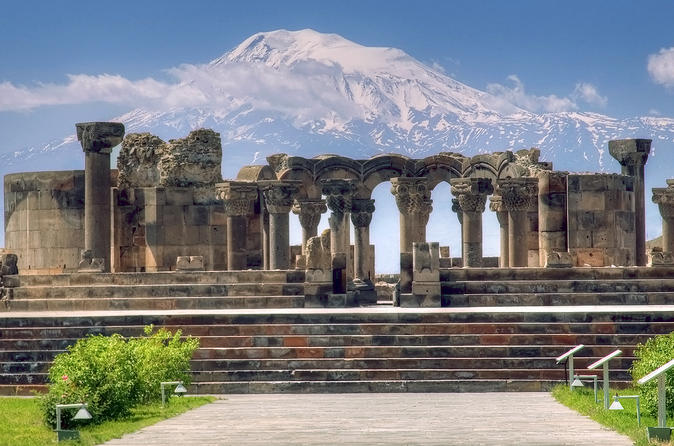 We offer you a tour around Armenia which will help you to discover the ancient culture of the country.

Day1: Pick up from the airport and transfer to hotel. Short sightseeing tour in Yerevan, during which you’ll get acquainted with the capital of Armenia. Tour to the only pagan temple left in Armenia – Garni. Nowadays the ruins of the royal palace and the bathroom with a stunning mosaic work can be found near the temple. Visiting both Garni and situated not far Geghard monastery in one trip is so common that they are often referred to in unison as Garni-Geghard. Geghard (meaning "spear") is a medieval monastery (13th century) in the Kotayk province of Armenia, being partially carved out of the adjacent mountain, surrounded by cliffs. It is listed as a UNESCO World Heritage Site. Back to Yerevan. (L)
Day2: Breakfast at the hotel. Tour to Tsaghkadzor, the ski resort, with forests and an ancient monastery Kecharis (11-13th centuries). The main group of the complex consists of three churches. Kecharis was a major religious center of Armenia and a place of higher education. Tsaghkadzor is one of the places in Armenia, where people go in summer  to get away from the city life and the heat, for the fresh air in the mountains. In winter, the town is completely overtaken by skiers and people who just want to relax and enjoy the snow and scenery. During the tour the ropeway will be optional. Tour to Lake Sevan  and Sevanavank the monastic complex located on the peninsula, which was an island until the mid-20th century. Overnight in Dilijan spa city. (D)
Day3: Breakfast at the hotel. Tour to Haghartsin and Goshavank monastic complexes. Overnight in Alaverdi. (D)
Day4: Breakfast at the hotel. Tour to visit two monasteries of the 10th century Sanahin and Haghpat, which are one of the current UNESCO World Heritage Sites in Armenia. Back to Yerevan. (D)
Day5: Breakfast at the hotel. Tour to Etchmiadzin, one of the three saint places in Armenia. We will also visit St. Gayane and St. Hripsime churches. The cathedral and churches of Etchmiadzin and the archaeological remains at Zvartnots graphically illustrate the evolution and development of the Armenian central-domed cross-hall type of church, which exerted a profound influence on architectural and artistic development in the region. Zvartnots Cathedral (meaning "celestial angels") is a 7th-century cathedral. Now in ruins, it is located at the edge of Etchmiadzin. Cathedral and Churches of Etchmiadzin and the Archaeological Site of Zvartnots are included in the UNESCO World Heritage List. (L)
Transfer to the airport.

We offer you a tour around Armenia which will help you to discover the ancient culture of the country.