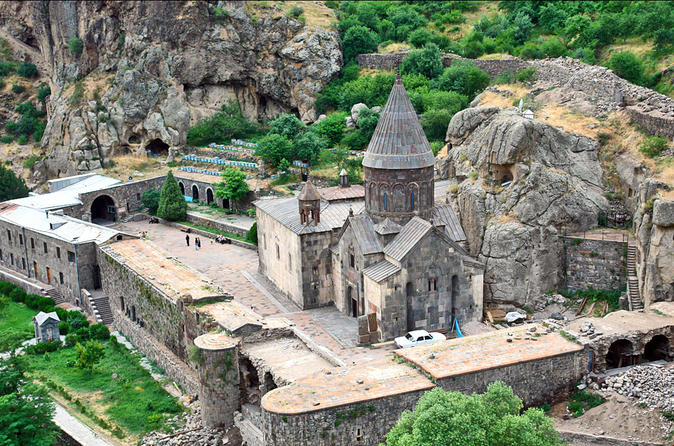 Join the group to explore most amazing attractions of Armenia! First up visit Garni, the only pagan temple which exists in Armenia before moving onto Geghard monastery, a complex which is carved in a cave. Finally see the "Lavash" (Armenian bread) baking is one of the most beautiful and common Armenian national traditions.

Begin your tour with pickup from your central hotel in Yerevan or from a central meeting point at 10am.

Settle inside your comfortable, air-conditioned vehicle and travel into eastern Armenia for a short stop at Charent's Arch. Soak up the wonderful views from here to Mt. Ararat, and then make your next stop at Garni Temple, a stunning temple that looms over mountain gorges.

A blend of Greco-Roman and Armenian architectural styles, this unique example of pagan culture is the only surviving of its kind in the country.

Believed to have been built by the Armenian King Trdat in the first century AD as a temple to the sun god, Mihr, it lost its significance when Armenia converted to Christianity in the early 4th century. The temple was then used a summer residence by the country’s kings and today, the remnants of the palace and its bathroom, complete with stunning mosaic work, can be seen nearby.

After exploring here, visit the Geghard Monastery, an unsurpassed masterpiece of 13th-century Armenian architecture. This UNESCO-listed complex of churches is partially carved from a mountainside, with cliffs surrounding the buildings, and was originally called Ayrivank, a name that translates as ‘Monastery of the Cave.’

The monastery was later renamed as Geghard, meaning ‘lance,’ after the spear used by a Roman soldier to stab Jesus on the cross was kept here for several centuries.

The architectural design of one of Geghard’s rock churches is such that it provides extraordinary acoustics, making sacred songs sound remarkably rich and divine. The whole complex is awash with detailed sculptures, cliffside monks’ cells, and many striking stone crosses (khachkars), elaborately etched into the rock faces.

Your last stop is the family-run Three Jugs restaurant for a presentation on Armenian lavash. This traditional flatbread is made with flour, water, and salt, and its thickness depends on how thinly it’s rolled out. Toasted sesame or poppy seeds — or both — are sometimes then sprinkled on top before baking. Traditionally, the dough is rolled out flat and slapped against the hot walls of a clay oven where it then cooks.

Watch a demonstration on how lavash is made and take the opportunity to try your hand at preparing and baking it. Then, once it’s ready, enjoy a tasting: savoring it with local cheese and green vegetables.

Afterward, return to Yerevan where your tour ends at the original central meeting point.

Join the group to explore most amazing attractions of Armenia! First up visit Garni, the only pagan temple which exists in Armenia before moving onto Geghard monastery, a complex which is carved in a cave. Finally see the "Lavash" (Armenian bread) baking is one of the most beautiful and common Armenian national traditions.